Following our previous article Signal intelligence 101: SIGINT targets, which described what kind of intelligence the USA could collect by targeting a variety of Soviet electronic emitters, Rob1 and I assembled an history of the high-altitude satellites which performed the collection. In the same fashion as History of the US reconnaissance system, which focused on imaging satellites, the sources we relied on are available at the end of the article. However, since these satellites are still classified even 50 years after the first was launched, a lot of uncertainty remains.

Also, to make the chronology lighter, most of the dates regarding the political and organizational context have been omitted. Since they already are in History of the US reconnaissance system, please refer to it for those.

1960
The Galactic Radiation and Background (GRAB) satellite is launched. Under the guise of a science satellite, it is actually the first US intelligence satellite to reach orbit and return data. It was a low-orbit satellite with a radio repeater, to listen to radars deep within the Soviet landmass. It is the first of a long series of low-orbit US SIGINT satellites that continues to this day, and will be the subject of another article.

1962
The COMmittee on Overhead reconnaissance (COMOR) establishes the priorities for future US SIGINT satellites. Among them are:

These consist in operational and technical electronic intelligence, as well as preparatory work for telemetry intelligence (TELINT). The overall goal is to assess Soviet capabilities to wage and withstand a nuclear war. 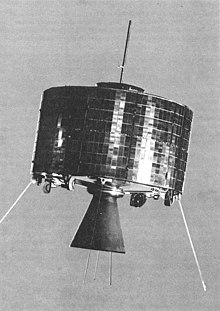 1963
The USA launches Syncom-II, the first geosynchronous communication satellite. Following this, the CIA’s Directorate of Science and Technology starts thinking about using a high-altitude satellite to collect telemetry data from space.

1965
• COMOR starts preparatory work on communication intelligence via satellite, by ordering a technical study of what is probably the Soviet microwave or troposcatter networks. A geosynchronous collection system is in the works.
• The development of the CIA geosynchronous TELINT system, codenamed RHYOLITE, starts. It requires the development of a large deployable antenna, reportedly with a 20m diameter.

1966
The US decides to install a ground station in Pine Gap, Australia, to control the Rhyolite satellites and receive the intercepted data. It is codenamed RAINFALL.

1968
First launch of CANYON, a geosynchronous COMINT satellite program, which will eventually total seven launches until 1977. The CANYON program (also known by its unclassified codename RUNWAY or its mission number in the 7500 series) was managed by the US Air Force and built by Lockheed. It was controlled from Bad Aibling in Germany. The volume of intercepted Russian communications is so high that the NSA enlists the help of Canadian and British translators.

1970
First launch of RHYOLITE (7600 series mission number), a CIA program with TRW as contractor. Rhyolite had been designed as a telemetry collection satellite, but the NSA added COMINT and ELINT subsystems. In total, four Rhyolites were launched until 1978, working in a two-spacecraft constellation. The satellites were most often directed at the main Soviet strategic weapons test sites (the Tyratam and Plesetsk launch sites and Kamchatka peninsula impact area) but were occasionally repositioned to monitor the 1971 India-Pakistan war, Vietnam and China.

1971
First launch of a third class of high-altitude SIGINT satellites called JUMPSEAT. Unlike the other two programs, Jumpseat is launched in a highly-elliptic, highly-inclined orbit (called a Molniya orbit) during which it “hovers” over the northern regions of Earth for eight hours. Its primary mission is ELINT collection on Soviet antiballistic missile (ABM) radars, with COMINT and FISINT as secondary missions. In total, 7 Jumpseat satellites, reportedly made by Hughes, will be launched until 1983.

1975
Geoffrey Prime, a British translator at GCHQ, betrays the existence of Canyon to the Russians. Christopher Boyce, a TRW employee, sells information on Rhyolite to the KGB. The Soviets start to partially encrypt their telemetry signals.

1978
• First launch of CHALET, a successor of Canyon, of which it keeps most characteristics. However, it is controlled from Menwith Hill in the United Kingdom instead of Bad Aibling. After the loss of CIA ground telemetry intelligence sites in Iran due to the Islamic revolution, Chalet is given a secondary telemetry intercept mission. Chalet will eventually be renamed VORTEX after its codename is compromised, and then again MERCURY. At the height of its operation, Vortex/Mercury worked in a three-spacecraft constellation which provided a wide coverage from Eastern Europe to Far East, including all the Soviet Bloc as well as the Middle East and Asian communist countries.
• During the post-Vietnam War era, several reorganizations are made in US intelligence. One is to improve support to military operations by providing intelligence gathered by “national” systems to tactical commanders.

1982
Falklands war. A Vortex satellite is re-tasked to provide intelligence to the British. This situation shows how important SIGINT intelligence collection by satellite has become, and pushes the British to “buy” that capability by financing the budget of one US SIGINT satellite later in the decade.

1985
The first MAGNUM/ORION satellite, a derivative of Rhyolite, is launched.

1986
An example of SIGINT satellite support to tactical military operations occurs with the US bombing of Libya (operation El Dorado Canyon). An NSA history reports that “NSA diverted virtually every satellite it had, resulting in severe constraints on Soviet and PRC collection, as well as diminished … collection of Persian Gulf communications.” Satellites produce 72 percent of tactical SIGINT reports, while conventional SIGINT means provides only 20 percent, showing how vital overhead SIGINT collection has become.

1989
Launch of the last VORTEX, and of the second Magnum/Orion.

1994
• First launch of an “Advanced Vortex” satellite, inserted in GEO. 3 launched in total. Documents leaked by Snowden show that they are currently still simply codenamed Mercury and use 7500-series mission numbers. They are primarily targeted at microwave emitters, but are sensitive enough to intercept cell phones and many other signals. They are digital systems, meaning radio signals are converted from electrical field to 0 and 1s on the spacecraft itself. Two satellites can be used simultaneously to localize an emitter.
• The first TRUMPET is launched in Molnya, to replace Jumpseat. 3 launched in total.

1995
First launch of an “Advanced Orion” or “Mentor” satellite. Documents leaked by Snowden show that they are currently still codenamed ORION with 7600-series mission numbers. One such document, dating probably from the 2000s, describe it as
“a versatile SIGINT collection system designed to downlink unprocessed SIGINT data. Mission 7600 satellites are in geostationary orbits designed to allow near continuous coverage of the majority of the Eurasian landmass. […] Mission 7600 was designed originally as a FISINT collector but now is primarily used as a COMINT collection system against known targets of high intelligence value. Currently, about 85% of Mission 7600 collection is against these COMINT targets, [with] secondary missions including FISINT, ELINT and satellite links (uplinks, cross-links, and downlinks)”.
They are built by TRW at first, which is later acquired by Northrop Grumman. 7 are launched in total in geosynchronous orbit. As with Mercury, a pair of satellites can localize an emitter.

1998
Last launch of an advanced Vortex/Mercury, which ends in a failure.

2004
First launch of a project 8300 satellite. The satellites of this new series orbit in GEO and are destined to replace the previous-generation Orion and Vortex. They perform TELINT, COMINT and Operational ELINT in support of military operations, and . They have a large dish to collect faint signals, and a smaller one used to look for signals and to collect the stronger ELINT signals. They work as a constellation with a minimum of 3 satellites, covering Eurasia, and operate alongside mission 8200 satellites (which remain to be identified) as part of the Integrated Overhead SIGINT Architecture, to provide highly accurate emitter locations. Curiously, there are still codenamed ORION/RIO.

2006
First launch of a TRUMPET Follow-on, 2 launched in total in Molnya orbit.

2009
Launch of PAN, the first NEMESIS-class satellite. PAN‘s “mission will be Foreign Satellite (FORNSAT) collection from space – targeting commercial satellite uplinks not normally accessible via conventional means.” PAN is born after a quick (3 years) development and  is based on a A2100 Lockheed Martin commercial bus. Thus it is probably the first US high-altitude SIGINT satellite not derived from a cold war-era design.

2011
A counter-improvised explosive device (IED) intelligence reporting system called RED DOT is deployed in support of military operations in Iraq and Afghanistan. This is an interesting case of national intelligence systems (SIGINT satellite) used in tactical support at the lowest possible level. Red Dot relies on intelligence provided by SIGINT satellites which identify and geolocate IED-specific signals. Red Dot displays locations of probable IEDs as a “red dot” on a digital map in military vehicles or command posts in the field.

2014
Launch of CLIO, the second Nemesis, also built by Lockheed Martin. An evolved version of Trumpet Follow-On is launched to Molnya.

Satellite performance in function of antenna size and frequency

View all posts by rob1blackops

5 thoughts on “History of the US high-altitude SIGINT system”