In November 2018, ESA held a series of talks on the future of Earth observation. It was part of the agency’s “Φ-week” event and took place at ESA’s Earth observation center in Frascati, Italy, and the participants ranged from large space primes to small startups. The full recording of the event is available there.

This article sums up one interesting talk on Airbus’ SAR strategy.

The German branch of Airbus has long led the development of Synthetic Aperture Radar satellites, with a significant support by Germany’s DLR aerospace center. The most well-known of those satellites is probably TerraSAR-X, which was launched in 2007.

With the development of smallsats, including SAR smallsats, Airbus wondering how the market could evolve and how it could leverage that trend, even though its SAR satellites so far have been quite large. In Airbus’ view, there is room for both in the future: 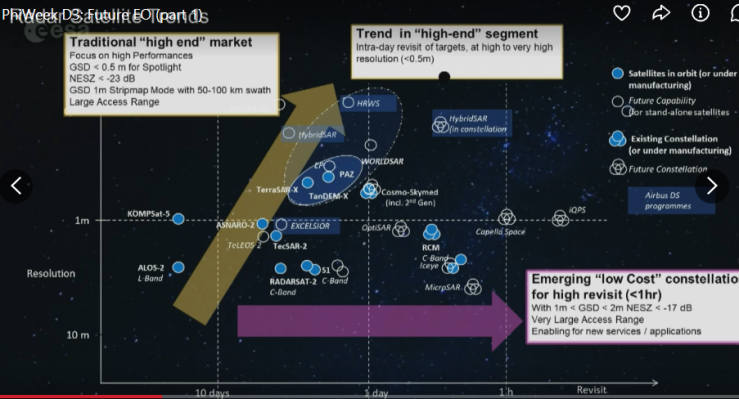 From the applications side, the perceived customer requirements are the following, which can be achieved by Airbus’s future big SAR mission, except for maritime surveillance: 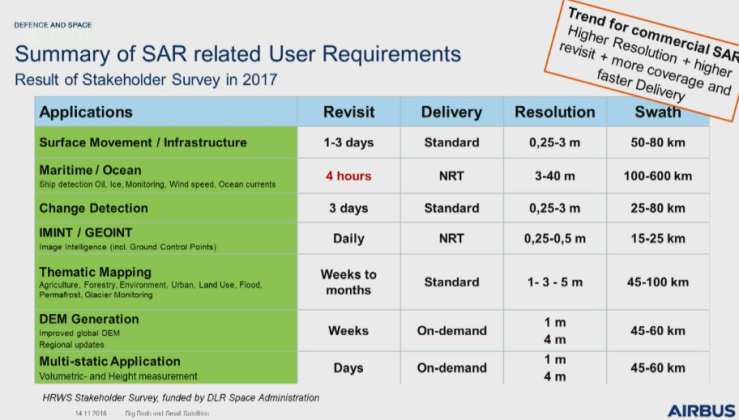 Overall, the requirements are evolving towards higher resolution, higher revisit and higher coverage.

Airbus also looked into a detailed comparison between big, expensive satellites and small, cheap ones:

They concluded that integrating both large and small satellites could be very useful for maritime surveillance: either the large ones provides wide-area search and the small ones keep tracking the ships over time with a high revisit, or the small ones perform the detection and the large one then gives high-resolution images of the ships of interest:

Performing high-speed data downlink, analysis and tasking plan uplink remains a challenge though. Curiously, even if Airbus owns SSTL, which produces smaller SAR satellites like the 450-kg NovaSAR-1, the speaker said they were actively looking for discussion with other companies developing small SAR satellites, like ICEYE or Capella Space.

On the bigger side, Airbus’ future SAR mission, named HRWS for High-Resolution Wide Swath, will use a multistatic architecture with one big emitter satellite and smaller receiver satellites, much like Germany’s future military SARah satellite, on which Airbus builds the emitter radar:

The small receiver satellites enable to build very accurate 3D maps in a short time. The whole system will have very high performance, with resolution down to 25cm, swath up to 500km, polarimetric capabilities and high agility:

The funding for HRWS is not completely closed, but Airbus is already looking for partners to either buy a large SAR satellite from them and operate it as part of a constellation, or for cooperation with the startups planning constellations of small SAR satellites:

The full talk is available there, starting at 20:00