Following the previous post on Airbus’ SAR strategy, we will look at another interesting presentation from ESA’s 2018 “Φ-week”, this time on an imaging payload for cubesats presented by French company Safran Reosc.

Safran Reosc is a long-time supplier of space optics, specializing in polishing and coating telescopes for Thales Alenia Space or Airbus for instance. They saw the rise of the cubesats and their potential for Earth Observation and decided to design a full optical payload on their own.

Their analysis of the market is the following: to have a good resolution and a relatively long lifetime of 5 years (which lower costs), cubesat and smallsat constellations will be deployed in a 500km orbit. Regarding resolution, ESA’s Sentinel program provides free multispectral 10-meter imagery, so nobody will try to compete with it, and resolutions well under 1m are hard to achieve with smallsats. So they chose to focus on the 1m-10m range. Unfortunately for them, Planet is already deploying a constellation of optical cubesats in the middle of that range (3m-5m), and competing with them will be complicated since they have a good headstart. So Safran narrowed down their target to two niches: one around 10m resolution, and one around 1m.

Safran calls both solutions SEEING (for Small satEllite instrument for Earth imagING), and the high-resolution version is SEEING 1.5m, which uses a 19cm aperture telescope that fits into a 8U (20cm x 20cm x 20cm) volume. The very high compactness is achieved using freeform optics. Since SEEING is intended to be a full payload, it also includes colour filters with a very efficient spectral profile produced by Safran, and an off-the-shelf full-frame sensor, plus some image processing electronics.

With this design, they achieve a 1.5m resolution from the target 500km orbit, with a rectangular field of view of 10 x 6.7km. They also claim that with super-resolution processing they can improve the resolution by 2x, which I have a hard time believing since they also claim the system is already diffraction-limited. Since the design is fully reflective, it can also be used for thermal infrared imaging, albeit at a lower resolution. 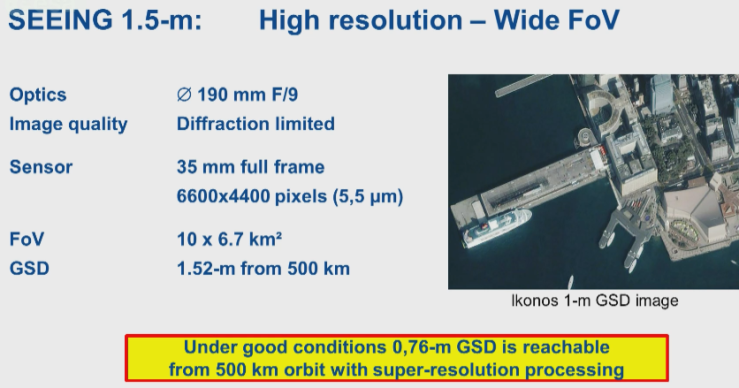 The main differentiator of this system compared to the competition is that it is very compact, and very light. So it can be fitted into a 12U spacecraft, which Safran has confirmed with French cubesat manufacturer Nexeya. They even envision variants of the system with several imagers per satellite, to increase the swath width.

What they do not mention is the price, which is probably a bit higher than their competitor’s due to the complex optics. However, if the compactness of the payload allows more satellite to be carried be launch, or if the low mass reduces the cost of each individual satellite, spending a bit more on the imager can make sense from a constellation designer’s perspective if it lowers the total cost of the constellation.

Overall, SEEING 1.5m gives Safran a good position as a partner or subcontractor in a smallsat constellation. For instance, it would be very competitive should the French Ministry of Defense choose to launch such a constellation for tactical use, to avoid relying a handful of hard-to-defend and costly satellites, and increase its revisit frequency. This was suggested by the Minister herself in a recent speech.

On the lower resolution end of the market, Safran proposes the SEEING 10-m imager, with a different telescope, the details of which were not disclosed.