This article initially appeared on eastpendulum.com, a French-language blog about the Chinese military and aerospace industry

On October 17th, 2019, China launched the TJS-4 satellite from the Xichang Space Center. It was carried towards geostationary orbit by a Long March 3B rocket. However, contrary to the civilian communication satellites which are often launched to this orbit, very little information transpired about TJS-4. This was already the case for its previous brethren, TJS-1, -2 and -3, which is suspicious and hints at a military role. Furthermore, their designation suggests they have a different purpose from the Shen Tong military communication satellites, and the Feng Huo data relay satellites which downlink the data from the observation satellites. Let us try to understand what part this newcomer plays in the Chinese space system.

Thankfully, to help us out, CCTV showed a computer generated representation of TJS-4 shortly after launch:

At first glance, it looks like a classical communication satellite of which there are a dime a dozen.

However, upon closer examination, a few unusual features appear:

– The solar panels are very small for a communication satellite. In general, they have much larger ones, because they need a lot of energy so that the user terminals on the ground receive a powerful enough signal.

– The satellite carries an unfurlable reflector, which is a big parabola (like in a satellite TV dish) folded on itself. It will be unfurled later in the mission, and will be used to capture the radio signal over a wide surface, and to focus it on the antennas. This kind of reflector exists on civilian communication satellites, like for instance Alphasat:

The Alphasat reflector has a 12 meter diameter once deployed, and was provided by the American company Northrop Grunman. This kind of reflector is usually dedicated to communications with small, hand-held user terminals, which often use a relatively low frequency (between 1 and 4 GHz, meaning a wavelength between 30cm and 8cm). However, a difference between the Aphasat and TJS-4 picture can be seen: on Alphasat, the reflector focuses the waves on an hexagonal structure on the right side of the satellite. This is actually an antenna array which responds to the very narrow frequency band that Alphasat uses, between 1500 and 1600MHz. It has been optimized to respond only on this band, which is the one used by the Inmarsat operator, the terminals of which are also tuned to this frequency. Working within a narrow frequency band is necessary because frequency allocation is regulated by national and international agencies, and each operator is given a small portion of spectrum to avoid interferences between radio services.

On the contrary, on TJS-4, the reflector focuses the waves on a very different kind of antenna, which brings us to the last point:

– The TJS-4 antennas are triangular-shaped. These are log-periodic antennas, which have an extremely large frequency range: they are not optimized for a specific frequency like on a normal communication satellite, but can receive signals from a wide range of communication systems. This suggests that TJS-4 is not built to provide a communication service, but to be able to listen in on as many radio systems as possible. Thanks to the CCTV images, which show TJS-4 still attached to the last stage of the rocket, the size of the satellite, and consequently of its antennas, can be estimated, and the frequency range of TJS-4 can be deduced. The antenna elements are one-fourth of the wavelength, so the satellite can receive signals from 1.2m to 20cm of wavelength, or equivalently from 250MHz to 1.5GHz of frequency. It is even possible that smaller elements, not visible on the image, allow the satellite to go up to the upper limit of the S band, at 4GHz (commercial large unfurlable reflector can focus at least up to this frequency).

This makes TJS-4 a powerful signal intelligence system. It shall be noted that Beijing is not the first to procure such a satellite: the USA have had similar satellites since the 1970s, with a large deployable reflector and log-periodic antennas too. The most recent versions were revealed by Edward Snowden: 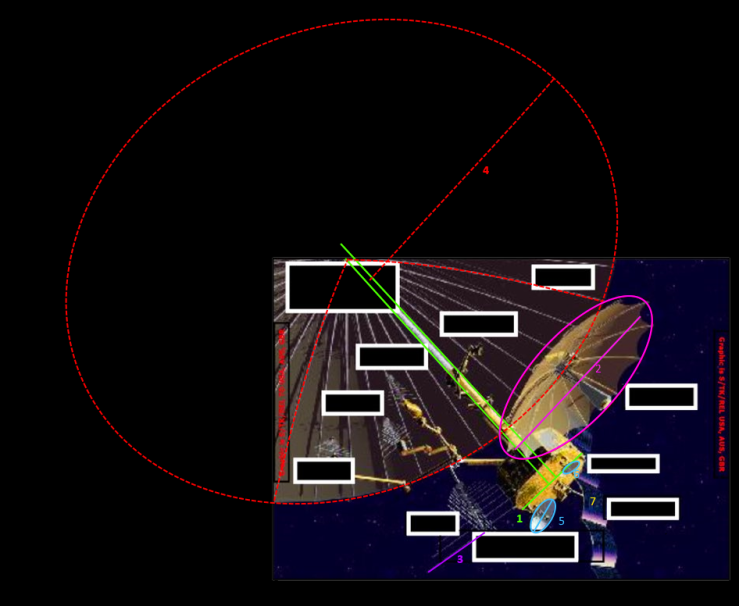 Their reflector is probably larger than TJS-4’s, and the antennas are put on robotic arms to be able to quickly change which area of the globe is targeted. A more detailed article on this satellite is available here: A radiotelescope in the sky: the USA-202 ORION satellite

On the contrary, TJS-4 has 4 seemingly identical log-periodic antennas, which probably enables it to very quickly localize the emitters it is listening to, by comparing the signal intensities received by each antenna. This can also enable to cover 4 times as much surface on the ground than with a single antenna.

Assuming that TJS-4 has a 10 meter reflector, then each antenna can cover a 1000km wide region at 1GHz, and a 4000km wide region at 250MHz. The antennas are probably positioned so that at their highest operating frequency, their cover contiguous areas.

After a few days in transfer orbit, TJS-4 injected itself into geostationary orbit at 83.5° East. If that it indeed its operational slot, then it will likely provide coverage similar to this:

The 83.5°E slot enables it to see part of the Pacific ocean in a grazing angle. This has two benefits: it maximizes the ground surface covered by the antennas’ footprints, and it enables to intercept directional emitters which are in this region of the globe and also use a grazing beam, like shipborne surveillance radars for instance. It seems logical given the focus China gives to the area  between the first and second island chains of the Pacific, from its point of view. Satellites are the best tool to collect signal intelligence in this region. The alternative would be to send reconnaissance planes, which might be intercepted by the fighter jets of neighbouring countries, and which do not cover as large a surface.

Besides, from its location, TJS-4 has a good view of the Middle East, of Africa, of Australia and of Siberia. However, it location right above India means it will not be able to intercept directional emitters, such as radars, in this region.

Through TJS-4, China has given itself a wide-area signal intelligence system, with a large frequency coverage, and has chosen to show it. This system will probably be targeted towards the Pacific, around the second island chain. It would then complement the Chinese maritime surveillance system that grows larger every year. And even more importantly, it will bring China closer to military and technological parity with the USA.

PS: After the publication of this article I came across a Chinese research article on TJS-4. See TJS-4 antenna design documents uncovered to know how accurate my predictions were.