In the article on Persistent Surveillance, I described the options for keeping a constant, 24/7 watch on a location though the use of high-altitude satellites. Those options are all expensive and technically risky. However, as hinted at in the article, there is a more straightforward way to achieve same goal, or at least to come reasonably close: using a constellation of many satellites in Low Earth Orbit (LEO).

Such a constellation gives a high revisit: while with a limited number of satellites, it may not be able to provide an uninterrupted video stream of a place, it can take snapshots of it every few minutes. With more satellites, a truly persistent stream might be achievable.

An example of such a constellation is the one planned by BlackSky Global. The full constellation is to include 60 spacecraft on low-inclination orbits, in order to provide high revisit over the most populated areas of the globe:

The full constellation would give a revisit every 18 minutes over the USA, Europe and Northern China. It would be made of 10 orbital planes:

However, in order for it to be affordable, not only have the launch costs to be low, but also each individual satellite has to be relatively cheap. Clearly, using traditional earth observation satellites, which are priced at a few hundred million dollars a piece, is not an option.

The solution is first to fly low-altitude orbits. This is because for a given ground resolution, the diameter of the telescope carried by the satellites is proportional to the altitude of the orbit, and larger telescopes cost much more than small ones. However the atmosphere drags down satellites that fly too low, so the minimum practical altitude is around 400km for satellites without dedicated drag-compensating engines. This puts metric resolution in reach of 30cm-diameter telescopes.

Secondly, since smaller telescopes can be used, the idea is to also lower the cost and size of the rest of the satellite by using miniaturized off-the-shelf components, derived from consumer electronics, wherever possible. Planets Labs pushed this idea to its logical conclusion: after its founders launched smartphones in space to check they would work on orbit, they designed cubesats based on the same technology and with small telescopes to take pictures from orbit. These very small satellites, measuring 10cm x 10cm x 30cm, are able to take 3m resolution images, on the cheap, by leveraging the peace dividends of the smartphones wars.

Planet has launched several batches of Doves, as they call them, and each batch is a new iteration of the concept, bringing improvements and resolving issues identified on orbit. Each batch has tens of satellites, and the end goal of Planet is to have hundreds of satellites in the air, continuously replaced as they become obsolete and fall down to the Earth. This will allow them to provide daily revisit of all of the globe at medium resolution. This is not extremely high revisit, but it is extremely high coverage. Since this coverage is systematic, it allows to perform untargeted searches: an user can look at the daily evolution of any place, even in the past since the imagery has already been collected. This is not possible with traditional observation satellites which have to be manually tasked to look at a specific place.

Other companies are looking into intermediate size satellites, halfway between Doves and the traditional 1 tonne satellites. Skybox, for instance, has launched several 100 kg satellites, called SkySats, which provide a resolution slightly better than 1m. This is highly competitive with the established players in commercial satellite imaging: Airbus’ sharpest satellites, for instance, produce only 70cm resolution data. The Skybox solution offers a similar resolution, at a lower cost and a potentially higher revisit rate. Furthermore, Skybox satellites use a specific sensor setup that can take full-motion videos, something the traditional satellites cannot do.

The BlackSky constellation mentioned above would also be made of similar satellites, weighing around 100kg and with a better than 1m resolution. UrtheCast is planning a combined optical and radar constellation, to be built by SSTL. The Chinese are also interested in small satellites for Earth observation and have launched some.

These constellations of high-resolution satellites do not provide a daily coverage of the whole Earth like the Doves do, but if fully implemented they do provide high revisit rates, with revisits every few minutes, and reasonably high resolutions. This makes them interesting for intelligence and military applications, as the SEEME project by the US Department of Defense shows. 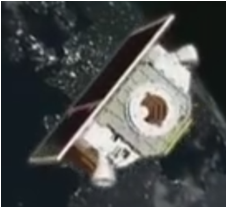 They also have an interesting synergy with Doves-like constellations, and that is why Planet just bought Skybox: since the Doves image the whole globe every day at medium resolution, they can detect places where interesting activity is occurring, and then the higher-resolution satellites can be tasked to take pictures of these places, to precisely characterize this activity. Because the volume of data produced by the Doves each day is extremely high, only a fraction of it can be reviewed by humans. This is why Planet will probably implement automatic change detection and tasking. That way, an algorithm will detect the areas of interest in the Dove imagery, and then order a SkySat to take a picture. The value of that is that if a customer is interested in this area later, he can directly download the high resolution images since they have already been acquired, instead of having to manually task a high-resolution satellite after the fact. So for the customer, high resolution is available everywhere he wants to look, even in the past, because it has already been collected by the tasking algorithm.

In some sense, the medium resolution imagery provides peripheral vision to the high-resolution satellites, much in the same way human vision works: only a tiny part of the eye is capable of high resolution, but since that part is pointed at the interesting details, it gives the illusion of high resolution in all the field of view. This idea of combining a medium and a high resolution constellation is not specific to Planet alone: it is also what Digital Globe wants to do with the Scout constellation. BlackSky, on the other hand, is looking into integrating news feed and social media with satellite imagery, and could deploy an algorithm tasking a satellite based on these in the near future.

However, one of the main limitations of small satellite constellations is that since the satellites have limited agility, if there are many areas to image, and if these areas are in the same region and close to each other, each satellite cannot take pictures of all of them. That means that some satellites have to be tasked to some of the areas of interest, and others the the rest of the areas. This cuts down the revisit rate in the region. Consequently, such constellations can provide an almost persistent surveillance of places spread out all over the world, but when there is a crisis in a region, they cannot perform as well: they cannot provide persistent coverage over all the region at the same time. So they cannot fully replace a fleet of surveillance drones focused on one region in particular, but they can help maintain an up-to-date global picture.

What is the rest of the industry doing?

One other interesting feature of the current space industry is that smallsat constellations are becoming popular in the communication sector too: Iridium is currently launching its 2nd-generation constellation, SpaceX is thinking about launching several thousands of LEO communication satellites, and OneWeb is securing funds for a similar constellation. The OneWeb project is the most interesting because it has attracted several billions in financing, and a partnership with Airbus to build a new factory to mass-produce small satellites. This factory is set to produce 700 satellites, weighing 150kg each, for half a million dollar a piece. After the OneWeb production run, Airbus is even considering using the same low-cost platform for Earth observation, and sees the US government as a potential customer.

The launcher side of the industry is evolving too: Europe has recently introduced the Vega rocket to launch small payloads to LEO, OneWeb plans to use the Launcher One rocket from Virgin Galactic to replace failing satellites, Planet is scheduled to launch its next satellites on the Electron rocket from Rocket Labs, and SpaceX sees the reusability of its Falcon 9 rocket as a way to launch its potential constellation cheaply and quickly. The Chinese are also introducing small launchers, to be able to orbit payloads on short notice. So the cost of a dedicated launch for a batch of small satellites is coming down across the board, and the rideshare opportunities make it even cheaper to launch prototypes in orbit to validate their performance.

Launcher One from Virgin Galactic

Overall, constellations of small satellites are the best way forward to get high revisit rates: they have no technical risk, are relatively cheap, and can still provide submetric resolution. The combination of a global coverage, medium-resolution component with a higher-resolution system also gives them the ability to act as a highly responsive, uncued search system. Along with lower launch costs, this ensures they will play a big role in the future of Earth observation.